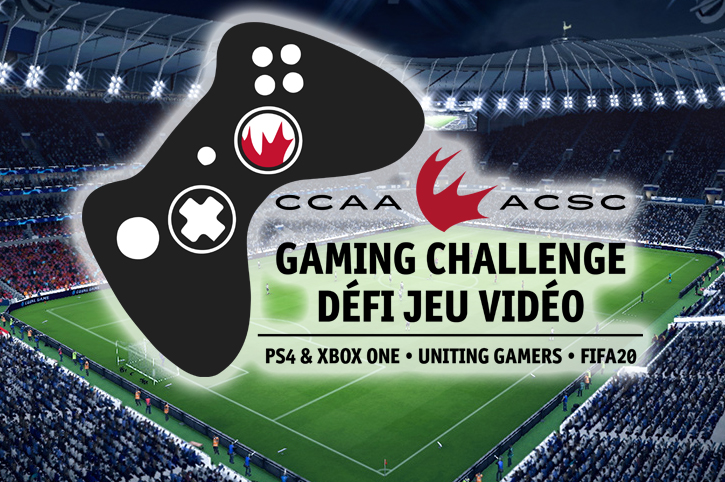 Posted with permission by the CCAA-ACSC. Original post found HERE

Tyronn King, a Legal Assistant student at Red Deer College, and a fifth-year guard on the RDC Kings’ men’s basketball team, is the winner of the NBA2K #CCAA Gaming Challenge.

King, who was playing in his first online gaming contest, defeated all five of his opponents two games to zero (best-of-three) on route to victory. In the semis, King beat Glynn Willis-Paris of St. Clair College 48-44 and 50-47 and followed that up in the final with 57-43 and 54-42 victories over Ryan Farrell of the University of New Brunswick Saint-John.

In coordination with Uniting Gamers, the CCAA created this new virtual contest to engage with students in the absence of traditional sports. Over the course of a month, online matches were contested each week in a bracket format, culminating with the Final Round on March 18th. The #CCAAGamingChallenge was open to any student registered at a CCAA Member Institution and featured 32 players from 16 different schools.

King notes that NBA2K is his favourite video game series and although he has competed in local tournaments he has never competed in an official online contest.

“The CCAA Gaming Challenge was a lot of fun, was run smoothly, and the other players involved showed a lot of sportsmanship”, says King. “I would recommend this type of contest in the future to anyone looking to have a good competitive time playing video games.”

Additionally, the Gaming Challenge allowed some of the CCAA’s dedicated partners to be involved by providing prizing for the competitors. Long time CCAA sponsors Jostens, Kahunaverse and 4imprint each contributed to the final three rounds of the Challenge.

“These contests were a unique way to connect with our students while also providing an opportunity for some of the CCAA’s partners to be engaged when there were no championships to support”, notes CCAA VP Marketing Joel Mrak.

As the top prize in the contest, King will receive a custom ring from Jostens Canada, the Official Award Rings of the CCAA. The Kahunaverse Sports Group, the CCAA’s Official Retailer, supplied e-gift cards for their online store to the top four players. While 4imprint Canada, the CCAA’s MIP and Championship Player of the Game Partner, provided CCAA branded backpacks for the top eight competitors.

Philip Balkhe, a Business Management student at Humber College, and Arash Davari, a Business Administration student at Langara College, were the winners of the FIFA20 #CCAA Gaming Challenge held in the Fall of 2020.

Additionally, the contests allowed some of the CCAA’s dedicated partners to be involved by providing prizing for the competitors.

“Sponsors have been essential to the success of CCAA events and these contests were an opportunity for some of the Association’s long-standing partners to be engaged when there were no championships to support”, added Mrak. “We thank Jostens, the Kahunaverse Sports Group and 4imprint for supporting this new contest.”

Jostens Canada, the Official Award Rings of the CCAA, designed custom rings as the top prize for Balkhe and Davari. The Kahunaverse Sports Group, the CCAA’s Official Retailer, supplied contest branded t-shirts for every participant and 4imprint Canada, the CCAA’s MIP and Championship Player of the Game Partner, provided CCAA branded backpacks for the top eight competitors on each platform.